An Interview With Matthew Porter, Chief Executive of the Professional Darts Corporation

An Interview With Matthew Porter, Chief Executive of the Professional Darts Corporation

Matt has been the Chief Executive of the PDC since 2008, and has worked for the parent company Matchroom sports since 2001. Matchroom and the PDC are well known for their leading lights, Founder, Barry Hearn, and his son, Eddie Hearn who has huge prominence in the boxing world.

Matt explained, "I was very fortunate in that my boss, Barry Hearn has always been someone who's given opportunities to young people, whether they're young boxers or young chief executives or whatever, so I think that was fortunate and not something that should be taken as read across everywhere.

With that said, being promoted at a young age, there was definitely a challenge to gain respect. and rightly so, because I was out of my depth at the start, you know, some people might still say I am, but I think time hopefully proves the opposite.” 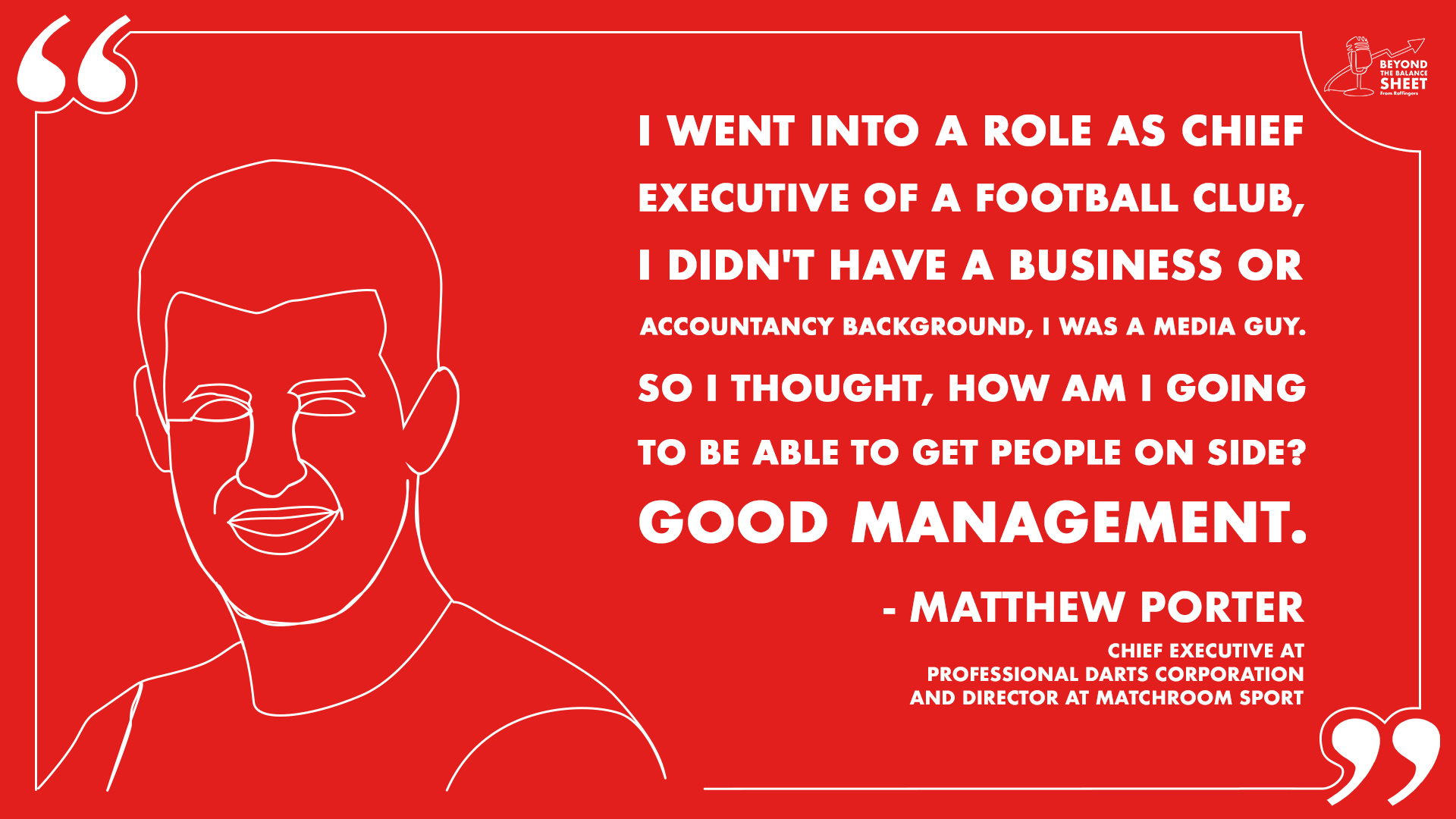 Barry has been Matt’s mentor since he started working for the business, and it wasn’t long into Matt’s career that Barry made him Chief Executive at Leyton Orient Football Club, where they were majority shareholders. Whilst Matt has worked on different sporting events under the Matchroom company, the sport of Darts is what he has focussed his energy on building for 15+ years and it goes without saying that in that time, the sport has undergone a massive transformation. Matt reinforced the point, “I think the main reason for that can be quite simply described as it gives people what they want. I think there's a lot of products out there that don't necessarily cater for what their audience or their market wants. They tend to give the audience or the market what they want to give them and then ask the audience or the market to like that instead of doing it the other way round.”

Sadly, what the darts audience didn’t want was the Covid-19 pandemic to hit. With the leisure & entertainment sector being hit the worst, it was no surprise that the world of live sports went through something that they will never forget.  Matt reflected, "I remember writing a statement that we issued in early March, just saying we've got no plans to cancel anything and that it was business as usual. We'd gone from being at an event in early March where we were kind of messing about all, should we shake hands or let's not shake hands with each other, then 10 days later we were at the echo arena in Liverpool and we'd sold seven and a half thousand tickets. And the actual number that clicked through that night was less than 5,000. Which is just unprecedented. If, you know, you'd normally get a maximum of 5%, no shows yet about a third of the people did not turn up.”

Not long after, the PDC took the approach to cancel events on a step-by-step basis, frequently reviewing the rules and seeing what was and wasn’t possible. Thankfully, they had great TV partnerships who were willing to continue doing the televised events, which ultimately meant that Matt and the team had to rework the TV product to ensure it would be entertaining even without the live element to it. Matt explained, “We had to evolve the product into something that was obviously not just first for TV, but exclusively for TV. And we're fortunate in that darts, although it's obviously based hugely around the atmosphere that the live crowd generate, it's a very good TV product as well and a TV product that you can deliver without a live crowd. People have developed the technology for the augmenting sound, so we evolved our TV product with sky and ITV, our broadcast partners.”

Fast forward over a year, and lockdown in the UK has now been lifted. With that said, for the leisure and entertainment sector, there is still an element of how nervous people are to be back in a packed night club, crowded pub or darts event, and as humans, it takes a bit of time to adjust to the new, new normal.

In a recent episode of our Beyond The Balance Sheet podcast, I talk to Matt in detail about what he learnt from being in a leadership role from such a young age, the importance of having a great mentor, and how important it is to get your team on side as a manager. Matt and I also talk about how live sport was adapted when the pandemic hit, and how the perceptions of the darts industry has changed over recent years.

Listen to the full podcast interview with Matt at the links below:

If you would like to get in touch with us about how we can help you achieve your business and financial goals, please don’t hesitate to contact us.