Tax From The Trenches: Beware Of The Cheap Fee Quote

Tax From The Trenches: Beware Of The Cheap Fee Quote 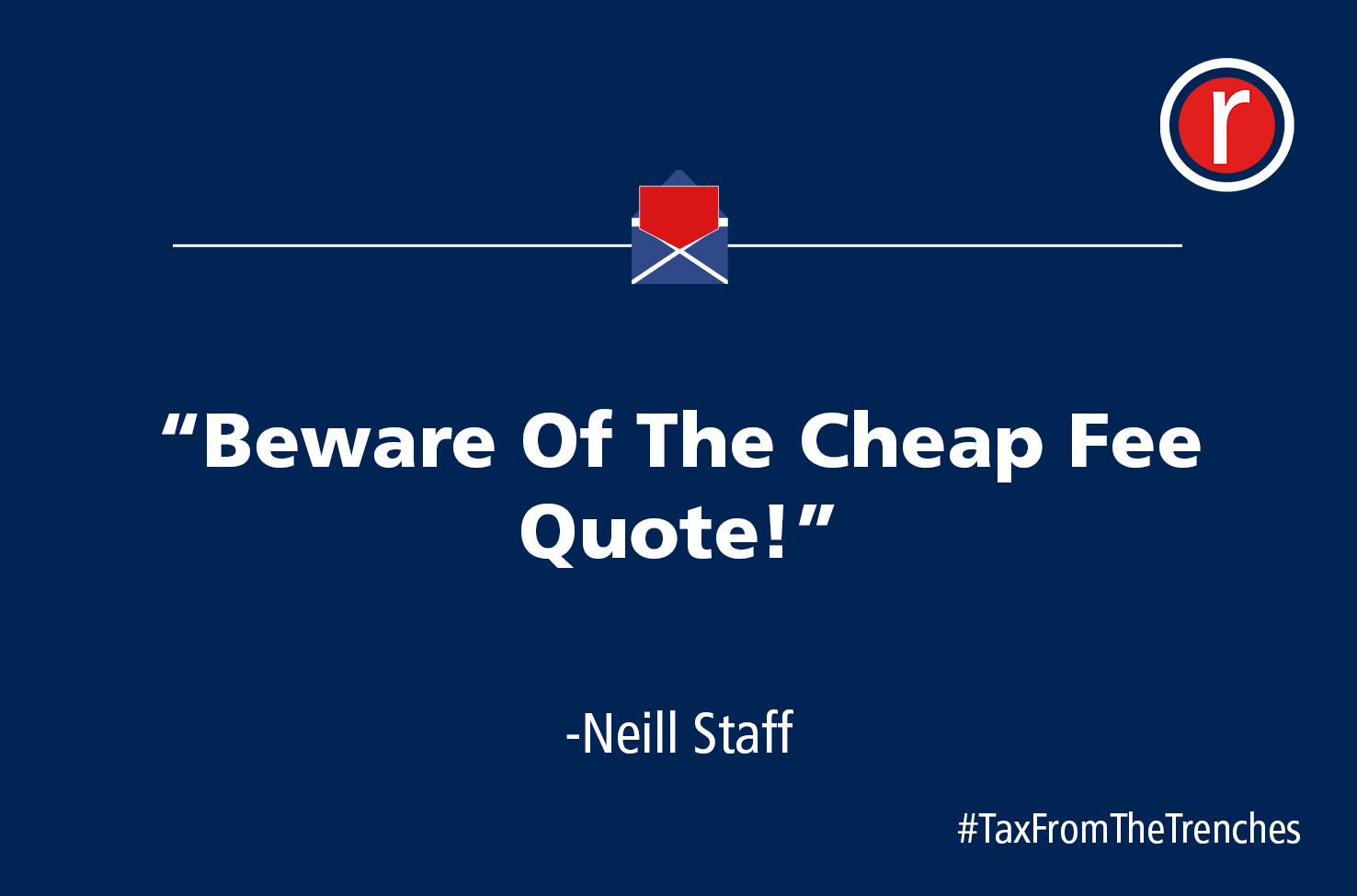 I had a telephone call with a lady a few weeks ago. She had seen several of my blogs and YouTube posts about the Let Property Campaign and proceeded to tell me that she had rented out two properties for around ten years. She had been in PAYE employment throughout this period and had never quite got round to telling HMRC about the income - we’ll call her “Anna”.

It was a very normal story that I hear several times each month. Most people know they should tell HMRC about their rental income but, for whatever reason, not everyone does. By the time a few years have passed it becomes a psychological mountain to climb and the fear of what HMRC might do becomes overwhelming. A few people I’ve spoken to over the years have been thoroughly miserable and just want to get straight with their tax and avoid the fear of getting the dreaded brown envelope from HMRC.

I had a nice conversation with Anna which lasted for the best part of an hour. I explained the Let Property Campaign process and how we would calculate the rental profits together with the tax interest and penalties. I assured her that we would make the process as quick and painless as possible and that we should be able to get from start to finish in one to two months, depending on how quickly she was able to get the information to us. I quoted an all-inclusive fee for dealing with everything from start to finish including registration for Self-Assessment and the completion of the 2019/20 tax return which, at the time of writing, cannot be included in a disclosure. I was confident that the client would sign up. Our fee quote is very much in line with other Let Property specialists, and we have a 100% track record with just over 200 submissions to HMRC.

Now for those of you who read my blogs, you will be more than familiar with the various articles that I’ve written about the Let Property Campaign already. Please rest assured that this isn’t simply another story of how to use the disclosure and what to do and how to get straight with HMRC. Today's blog is a warning to taxpayers to beware of the cheap fee quote and to make sure the accountant you’re thinking of engaging knows what they’re talking about.

Returning to the story, I was more than a little disappointed when I received a phone call from Anna to thank me for taking the time to provide such a comprehensive overview but telling me she was going with an accountant friend who had quoted a substantially lower fee. She asked if I could match the fee, but it was over £500 less than our quote and it seemed clear that the other agent had significantly under-quoted simply to get the assignment. Anna then went on to tell me that her accountant friend hadn’t used the Let Property Campaign before but had reassured her it was not necessary. All that was required was to complete tax returns for the last six years and, if necessary, HMRC might ask her to complete earlier years.

I groaned inwardly when I heard this. Most taxpayers don’t have a great deal of knowledge when it comes to tax, that’s why they engage accountants. To be clear, there are many accountants and tax professionals out there who are great at their job and provide a good professional service to clients. All good accountants will have their specialist areas, but more importantly, they will acknowledge that some areas of tax or accounting are beyond them. For my part, I have little more than a basic understanding of VAT and, consequently, I would never seek to offer professional advice or take a VAT-related assignment because I do not know enough about the subject. There are many VAT experts out there who would do a far better job than I ever could.

Sadly though, this doesn’t seem to extend to all accountants, and it doesn’t extend to the finer points of tax, where in my experience, there are a lot of people calling themselves accountants who think they understand about tax but clearly don’t.

I have to say this is a pet hate for me. People mainly go to accountants because they don’t fully understand their taxes and want to pay a professional to take care of everything. They are willing to pay a fee and just need the accountant to be honest in his level of understanding and service. It’s the same principle for me when it comes to DIY at home; I can paint walls and hang wallpaper, but anything to do with water or electricity is to be avoided at all costs. Many years ago, I tried to fix the plumbing and flooded the house. A few weeks after I tried to wire up some new lights and nearly electrocuted myself whilst perched on a ladder. Now, I pay for qualified plumbers and electricians because I cannot be trusted to do the work myself. I look for qualified people and I am happy to pay their fee. I expect them to do the job correctly and the house to be safe after they have left.

Then of course there’s the whole issue of trying to save money and let’s be honest, we all do this to some extent. But how often have we bought the cheaper paint at the local DIY store only to find it has the gumption of water and requires 5 coats? How often have we bought the cheaper garden furniture only to see it collapse within weeks? The best story I have is a dear friend of mine who was a ducker and diver all his life, and who inherited a substantial amount of money. He went to an exclusive BMW garage to buy a top-of-the-range model and couldn’t help himself asking if they did a discount for cash. My friend told me that the very well-dressed salesman had smiled at him like a Cheshire cat and explained, in a mildly condescending way, that this was a BMW dealership, and they had no need to do deals, nor would they take £45,000 in cash.

In this case, the other accountant has proposed a course of action that will end up with Anna paying late filing and late payment penalties that would not be payable using the disclosure facility. It is also pretty much guaranteed that HMRC will enquire into the returns and ask the obvious question of why it took so long to make a return of the rental income. They will most probably want to see the rental records and they will ask how long the properties have been rented. When they realise the properties have been owned for over ten years, they will ask why tax returns have only been submitted for the last six years. In short, the other agent’s proposed course of action is a recipe for disaster and will cost Anna dear, in terms of the penalties she will eventually be charged, but at least she’ll save £500 in fees!

I should be clear at this point, the disclosure facility doesn’t exempt the user from paying a penalty, quite the opposite in fact as it is a part of the process for having the disclosure accepted. The difference is that the agent and client effectively decide on the behaviour behind the omission, or the failure, and then self-assess the penalty chargeable subject to the rules on tax penalties. It is possible to reduce penalties to the legal minimum considering the mitigations that are available, and there is far more chance of a disclosure being accepted than receiving an enquiry letter from HMRC and spending six months to a year trying to persuade the tax Inspector that things are fine.

I explained the position to Anna and suggested she have an open and honest conversation with her accountant friend just to make sure they both know what is going to happen if they don’t use the Let Property Campaign. I hope Anna changes her mind and uses my firm to help her with the disclosure as whatever she pays in higher fees will be saved ten times over in terms of penalties.